Having not been to Silverstone for many years, and keen to see some of the new development work there, we headed to the VSCC Spring Start meeting on April 13th to have a look. The first surprise on arrival was the lack of people, as we pulled up in the sparsely populated Paddock Car Park, and within a few strides were ensconced in the Paddock, where spectators were free to wander around and see the cars up close being fettled and prepared for the day's racing. Being able to get access like this makes these grass root events so much more interesting, I feel. All a bit different at the Grand Prix held here later in the year I am sure! 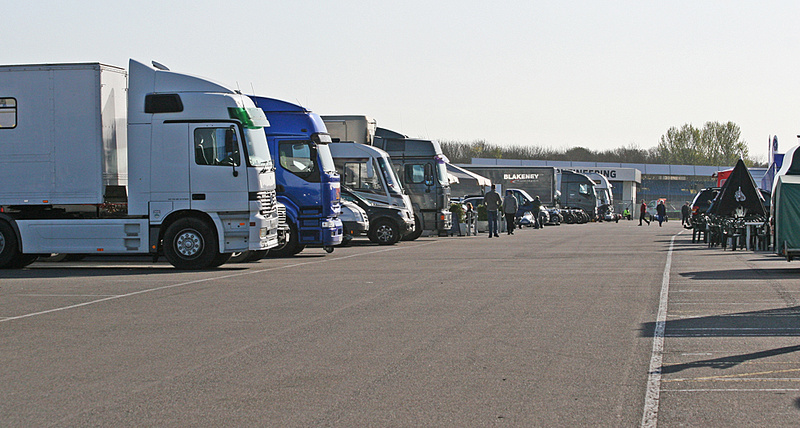 A few large transporters and motorhomes on show, and I felt like Ted Kravitz walking down here! 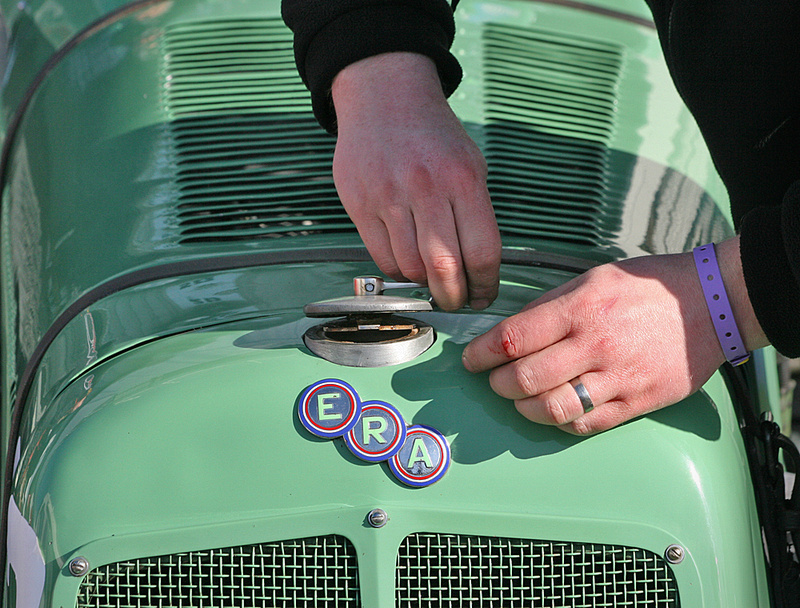 Last minute checks, and please note that the mechanic has the obligatory cut finger! 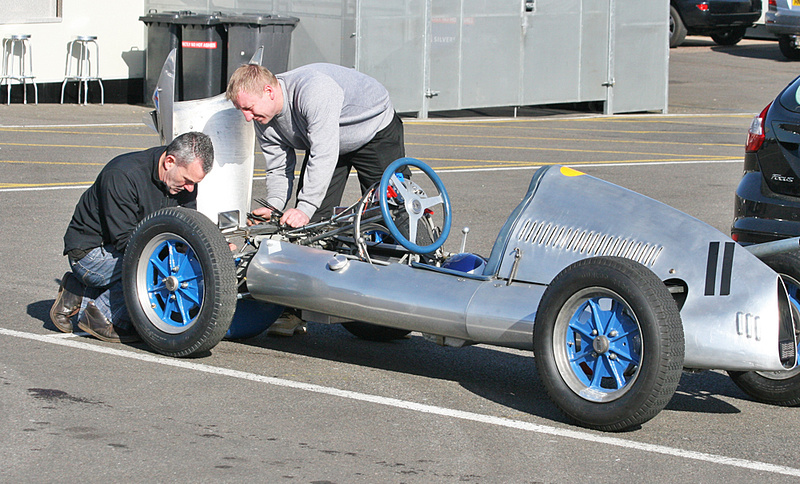 A bit of attention needed at the front end, but nothing that a fistful of cable ties won't cure by the look of it! 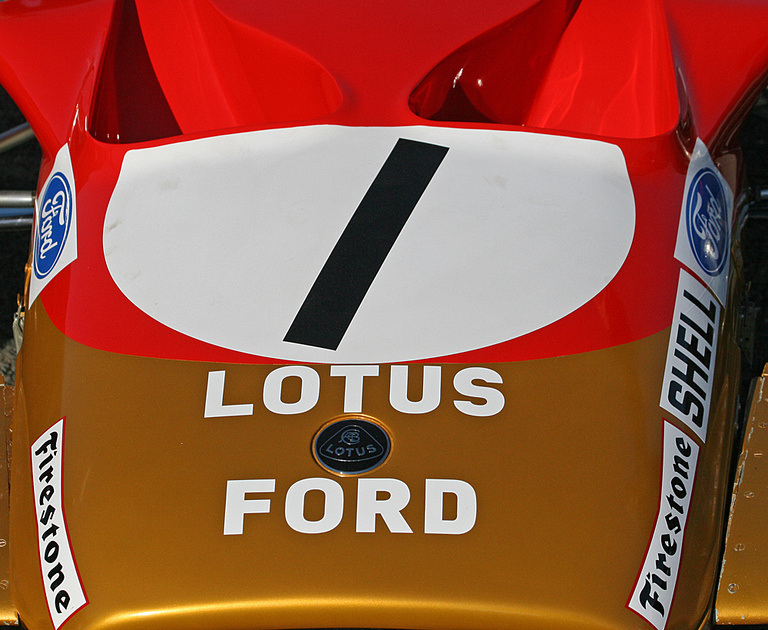 Bonhams had a stand showing some of their star lots from their future sale, and if you have a spare 7 figure sum that you are not sure what to do with, how about bidding on this ex-Graham Hill Lotus? 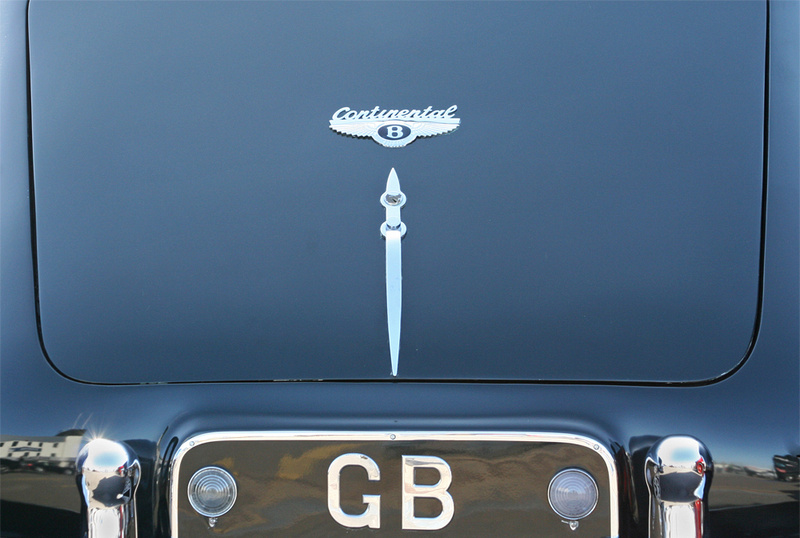 Or how about this lovely old Bentley Continental R Type? Pure sophistication and class for the discerning driver, I am not sophisticated, have no class, and am certainly not very discerning, but I would still love one of these classics! 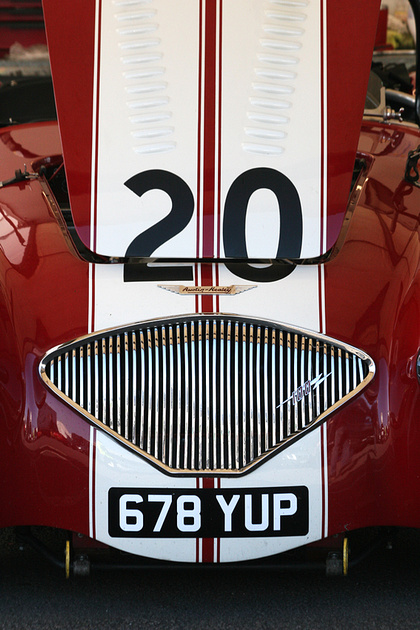 Just about the smartest looking Austin Healey I have ever seen. 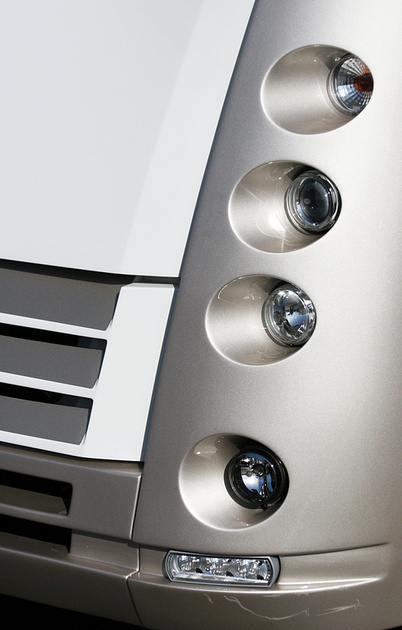 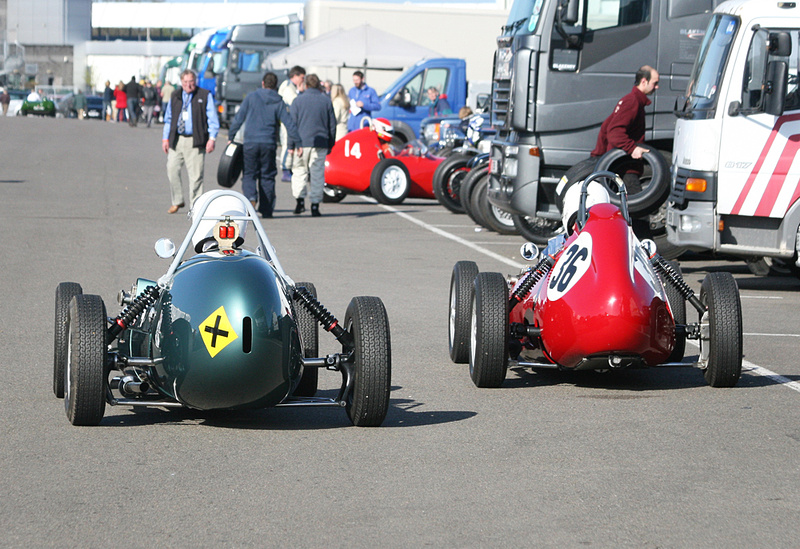 You have to keep your wits about you as the cars move around the paddock. 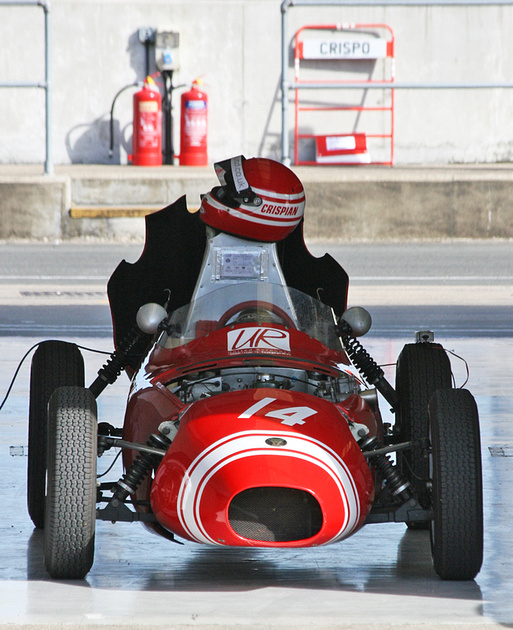 Access to the garages was allowed,  and found this car lurking, with the pit lane in the background.

A Frazer Nash displaying its rewards for winning its race on Saturday. 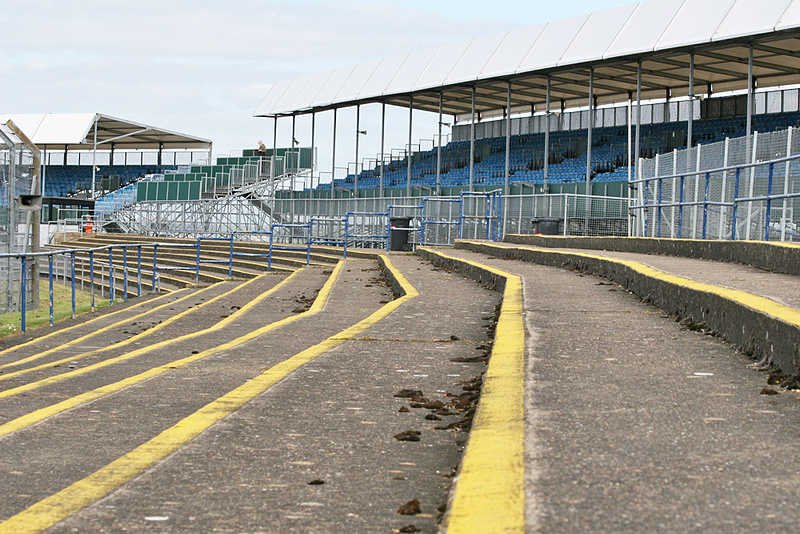 As you can see there was plenty of room in the stands, as we virtually had the place to ourselves. We settled on Copse Corner to see the racing action. One disappointment was that all round the track the fencing was around 10 feet high as you can see on the left hand side of this picture, and so made photography very difficult.

My brother  demonstrating our solution to getting a clear shot of the cars, above the fencing.  However, there were very limited places where this worked, and a very limited timescale of being able to hang on like this before your aching legs and feet cried enough. As you have probably gathered by now, smooth panning proved a little problematic! 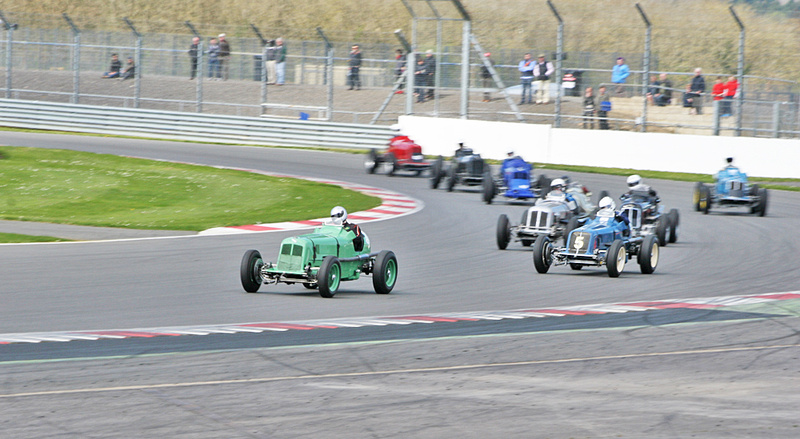 The highlight of the meeting for many, was the large collection of ERA machines assembled.

The ERA's came in all different colours, and were individual in other ways too. 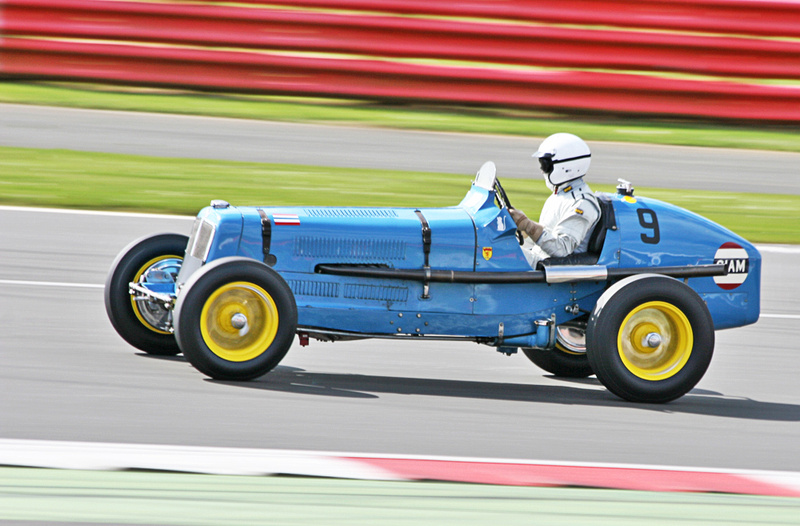 The infamous 'Remus' making an outing, and probably the most famous ERA of them all. Originally raced by Prince Bira, and proudly wearing the flag of Siam, it has been said that this is the most raced car ever. 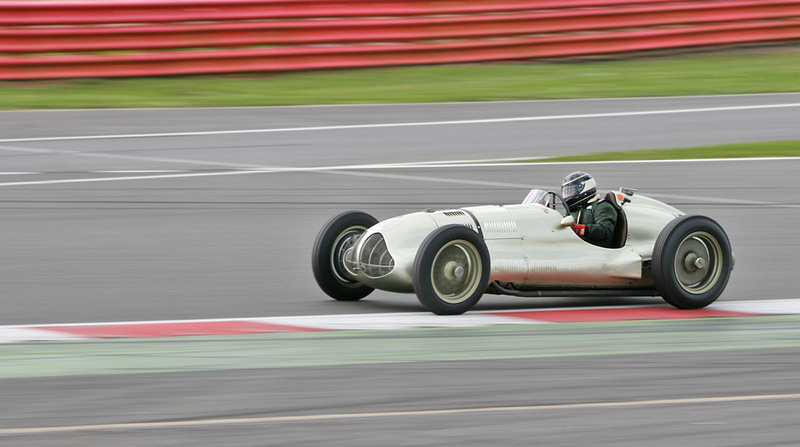 The ERA E Type looked sublime, and is very reminiscent of some of the pre-war German racing cars. 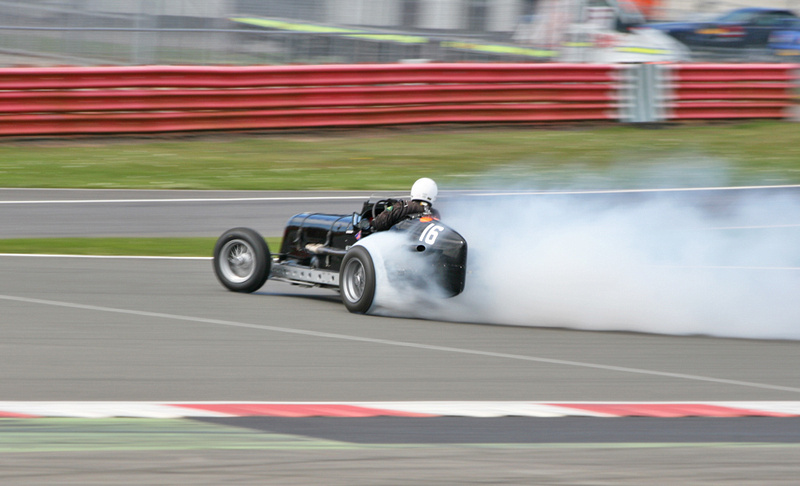 Proving that the reputation of ERA's being tricky to drive at the limit is correct, this driver went for  a quick spin, but thankfully no harm was done to either driver or car. 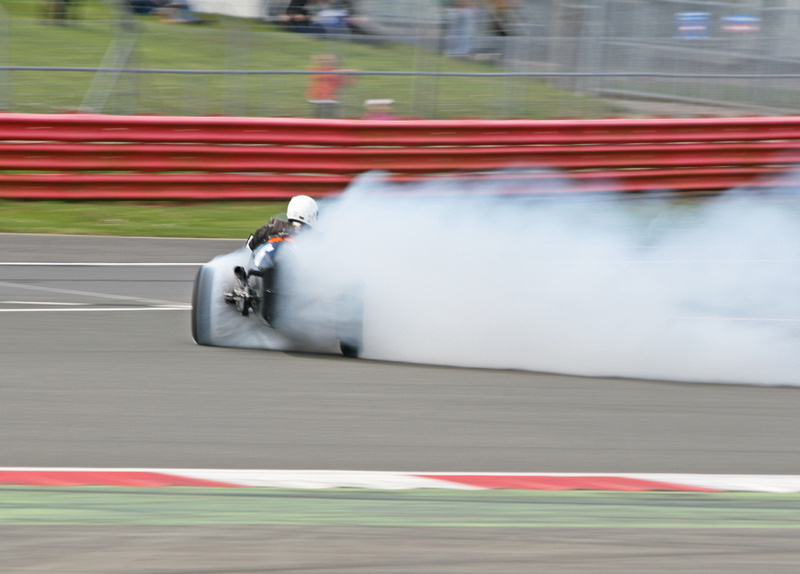 Shouldn't think the tyres were much good afterward though! 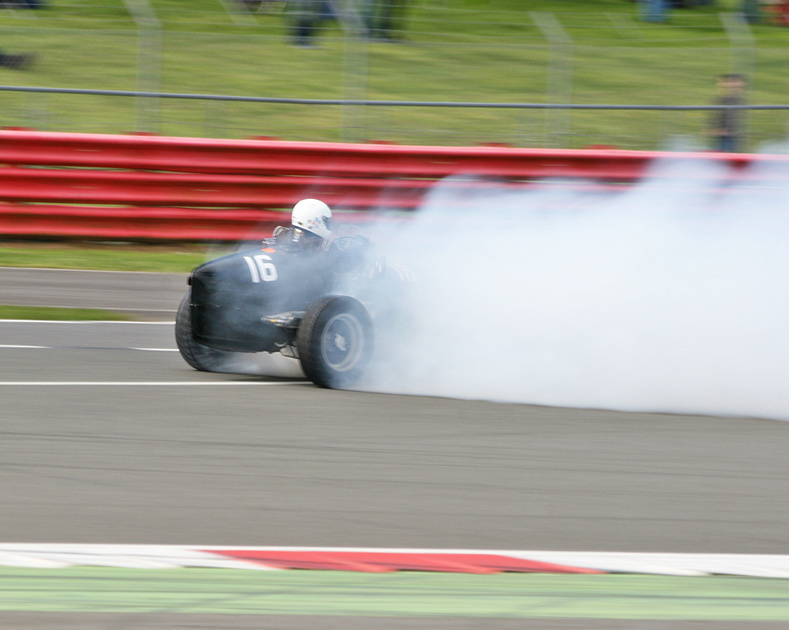 Whether he missed the barriers by skill or good luck I am not sure! 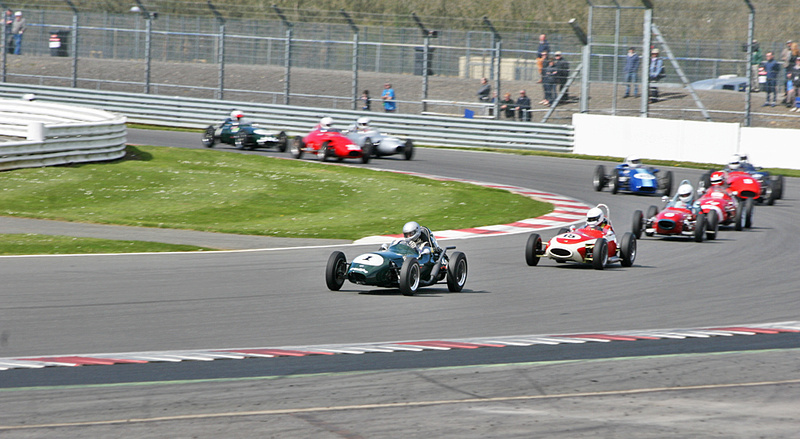 The smaller cars proved entertaining as well. The troublesome high fencing can be clearly seen in the background. 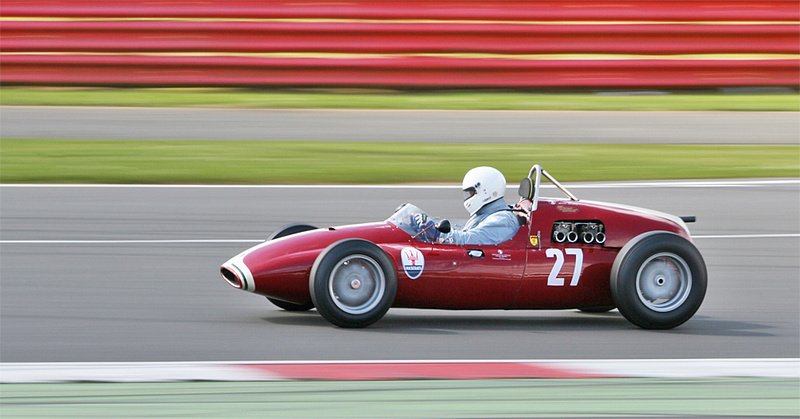 A dinky little Maserati at speed. 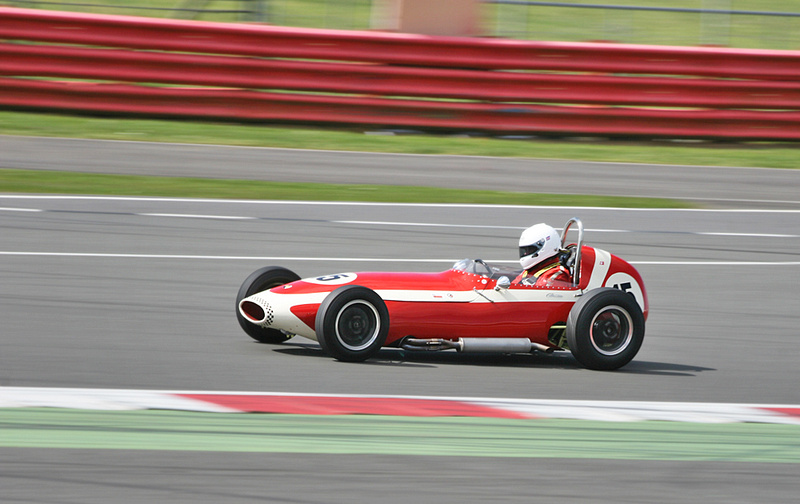 As you can see there isn't much spare room around the driver, as the cars are very small.
A good day was had, even though the racing wasn't the closest I have ever seen, the easy accessibility made up for it. True to Silverstone legend the fierce cold wind kept us wrapped up and shivering for most of the day, but when we got home we discovered we had sunburnt faces!
Keywords: 2014, Car Racing, Classic Car, ERA, Silverstone, Spring Start, VSCC
« Previous Post Next Post »